First United Church of Jesus Christ Apostolic started in 1991 and was officially incorporated February 2, 1992 under the guidance of Elder Austin Wright (deceased), Minister Hector Carpenter, and Bishop Leslie J. Barnes. Elder Wright and Minister Carpenter met in Florida after they arrived from Brooklyn and Chicago, respectively. Both men were searching for an Apostolic Church where the true Word was being preached without compromise. Their efforts were futile, so they sought the Lord for direction. After much praying, they were led to contact Bishop Barnes in Brooklyn, New York. He responded positively, and along with Sister Bryan and other saints, the ground work was laid for the inauguration of the church in Kissimmee, Florida. 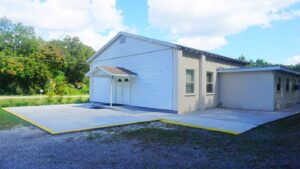 The church initially started with ten members, including family members of both Elder Wright and Minister Carpenter. Some members voluntarily allowed for the use of their homes for prayer meetings and church services. The church began to grow as people were baptized in the name of Jesus and received the gift of the Holy Ghost.

It was difficult to find a location for the church, but the Lord provided the use of First Pentecostal Church #1, located at 2818 Old Dixie Highway, where bi-weekly services were held. Bishop Barnes appointed Elder Wright as Pastor and Minister Carpenter as the Assistant Pastor. Great were the challenges the church faced, but having obtained help from the Lord, the church was sustained. With the increase in membership and the inability to worship more frequently as one body, a new location was sought, which lead Minister Carpenter to the current location at 550 East Jackson Street. After much toil and perseverance, the premise was purchased in 2001. The members now had an official home and felt the freedom to worship and fellowship as the Lord directed.

Pastor Wright, despite his illness, pastored the church with passion, dedication and zeal. In 1998, Pastor Wright went home to be with the Lord. His wife continued to attend as a member, but soon became ill and shortly followed her husband. Bishop Barnes took over the pastoral position of the church and appointed Elder Carpenter as his assistant. Today, Elder Hector Carpenter serves in the pastoral position with the continuous support and direction of Bishop Barnes.

Under the direction of both Pastor Carpenter and Bishop Barnes, First United has grown to another level in ministry. An annual Convocation held each December was added to the list of events sponsored by the Church. Currently, there are many ministries such as, Men’s, Women, Youth, Sunday School, Hospitality, Health Team, and Choir. As a means to reach out to the community, members within the church participate in monthly Evangelism. Annually, First United has also engages in activities such as the Sunday School Picnics, and Community Health Fairs. We believe God is enlarging our territory as we go to the highways and byways proclaiming the name of our Lord and Saviour.

With increased growth in membership, the physical location became too small to house all the programs of the church, and an adjoining property containing a house was purchased. This property provides needed space for Sunday School expansion, and the hospitality services of the church.

Pastor Carpenter is a visionary who is always seeking out new ways to get involved in the community. Thus, under his direction, outreach has become a priority for First United. His motto: Connect-Grow-Serve is a means of spiritually energizing the church to “connect” to Christ and to each other, to “grow” in the faith, and to “serve” by spreading the gospel. His hallmark message for the church is the promotion of internal spiritual preparation, as we anticipate the coming of the Lord Jesus Christ.