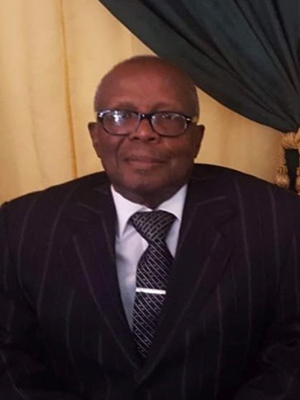 Elder Percival McLeod was born in the parish of St. Catherine, Jamaica, West Indies. Initially in 1953, he was baptized in the Church of God movement in Linstead, St Catherine.  However, through divine revelation of the Apostolic truth in Revelation 20 verse 6; he was later baptized in the name of Jesus Christ, in the year 1954. Shortly after, he received the baptism of the Holy Ghost at the All Saints Apostolic Church in Spanish Town, under the leadership of the late Bishop Norman Walters. He was ordained and served in the capacity of a Deacon, through the help of the Lord.

During his early years in his Christian journey, he was privileged to construct many Pentecostal churches throughout the island of Jamaica.

In 1963 he exchanged matrimonial vows with Evangelist Erna McLeod, of which the union produced seven children.

Elder McLeod relocated from Spanish Town to Evergreen, Manchester in 1967. He became a member of the Evergreen Pentecostal Church, where he worked along with Pastor Veryl Salmon to build the kingdom. He also served in the Sunday School Ministry as a teacher, a youth leader, and choir member.

He migrated to the United States of America in 1985; and worshipped at the King’s Chapel of Hempstead under the leadership of Pastor Basil Chambers. He then continued to serve in the ministry both spiritually and temporally.

In 2002, Elder McLeod retired from Scotwill Construction Company in Manhattan, N.Y. and through fervent prayer and seeking the Lord for direction on where to spend his retirement years; he happily relocated to Orlando, Florida in 2003.  Upon his arrival, he immediately became a member of the First United Church of Jesus Christ, with Pastor Hector Carpenter as his pastor.

While fulfilling the role of Deacon in Kissimmee, he was also a dedicated choir member, who was appointed president of the Brotherhood Ministry for a number of years. His delight is to serve in God’s vineyard.

In 2015, the Lord bestowed on him the honor and blessing to be ordained as an Elder, by Bishop Leslie Josiah Barnes. In humility, he continues to avail himself in whatever capacity the Lord directs him to serve, and or minister.